"Anything one man can imagine, other men can make real"

Jules Verne has influenced film and theatre, as well as snacks and an amusement park!

Having previously trained as a lawyer in Paris, Verne's passion for theatre and writing led him to a collaboration with publisher Pierre-Jules Hetzel on a series of adventure novels known as the Voyages extraordinaires. The collection of 54 novels, including Journey to the Centre of the Earth (1864) and Twenty Thousand Leagues Under the Sea (1870) proved to be very popular.

Another novel in the collection is Around the World in Eighty Days (1873), which features in Level H of the Kumon Recommended Reading List; here protagonist, Phileas Fogg, and his new valet Passepartout travel around the world in eighty days in attempt to win a £20,000 wager (approximately 1.6 million today) which has been set by Fogg's friends at the Reform Club.

In this novel, Verne wrote: "Anything one man can imagine, other men can make real." This quote is relevant to real life as Verne's story has been a massive influence in various other forms of entertainment, from theatre to food. To celebrate Jules Verne's birthday, we will explore some of the works that have been influenced by Around the World in Eighty Days.

Literature
The Other Log of Phileas Fogg, published in 1973 by author Philip Jose Farmer, is a science fiction novel which gives a different interpretation of the original story. Here, Fogg is immortal and comes from a race of humanoid aliens called the Eridani, he agrees to take part in a quest to retrieve a teleportation device, stolen from the Eridani. Farmer's version of events does not disagree with Verne's original story, rather introducing a secondary plot which follows the original book. (We're not sure if Verne would agree with this addition to the plot!)

Theatre
Between 1874 and the present day, there have been more than six notable theatrical adaptations of the book:
In 1874 Verne and Adolphe d'Ennery opened at the Theatre de la Porte Saint-Martin in Paris and ran for 415 performances, transferring to the Theatre du Chatelet in 1876, where it ran for 64 years with 2,195 performances; in 1946 Orson Welles produced and starred in a musical version, with music and lyrics by Cole Porter. This adaptation was only loosely based on the original plot. A second musical version ran in San Diego in 1988 with songs by The Kinks' Ray Davies; in 2013 another musical version, went on general release and has been performed across the globe.

The St. James Theatre in London put on an adaptation by Laura Eason which ran from 2015 to early 2016 with Robert Portal as Fogg, Simon Gregor as Passepartout and Shanaya Rafaat as Aouda.

Radio
There have been two radio adaptations, one in 1938, by The Mercury Theatre on the Air with Orson Welles playing the role of Fogg; and in 2008, a four-part drama was played on BBC Radio 7. Leslie Phillips starred as Phileas Fogg, with Yves Aubert as Passepartout and Jim Broadbent as Sergeant Fix.

Film
There have been seven famous film adaptations, the first being a German film, released in 1919, starring Conrad Veidt; in 1963, Moe, Larry and Curly joined Fogg's great grandson on his mission to complete his great-grandfather's original journey in the film The Three Stooges Go Around the World in a Daze; in 1988, an Australian animated adaptation was released; and 12 years later Warner Bros. released a direct-to-video animated version called Tweety's High-Flying Adventure, starring Tweety from Looney Tunes.

The most recent film adaption of the book was the 2004 version, starring Jackie Chan as Passepartout and Steve Coogan as Phileas Fogg.

Television
Five prominent television versions have been made, including Around the World with Willy Fog, a Spanish-Japanese animated TV series in which all characters are anthropomorphic animals. Willy (Phileas) Fog is depicted as a lion and Rigodon (Passepartout) is a cat; in 1989 there was a TV mini-series which starred Pierce Brosnan; in 1998 Michael Palin completed the same journey for a BBC series, though there was a minor hiccup in his journey as, when he returned to The Reform Club he was not allowed in as his attire was too casual! Michael had to settle for completing his travels on the steps outside the private members club.

Other
Other influences include a board game, an interactive mobile book, an amusement park, and Phileas Fogg snacks.

The above list only takes into account the most prominent adaptations of Around the World in Eighty Days. We are sure that there have been many, many more as the plot of the original story is exciting, inspirational and loved by many. Happy birthday Jules Verne! 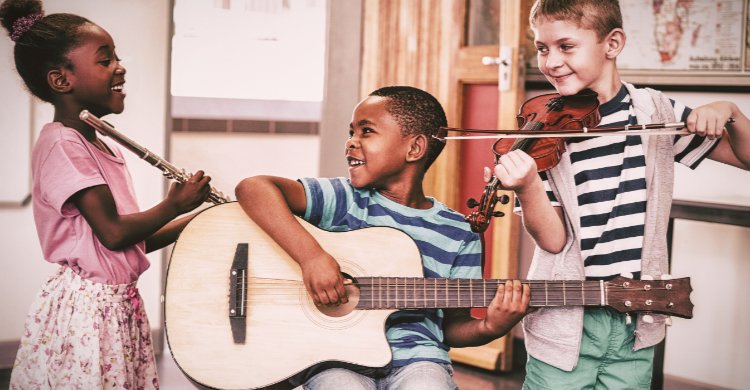 Latest
Articles for parents
The benefits of learning music to children
"Children who take part in music develop higher levels of social cohesion and understanding of themselves and others," says Dr. Alexandra Lamont, Lecturer in the Psychology of Music at the University of Keele.