Tomorrow (31 October) is All-Hallows' Eve, or Halloween. You may soon be heading out to the local supermarket to stock up on treats for tomorrow's trick or treaters, or busily sewing the sixth leg on your son's spider costume (nearly there), but have you ever stopped to consider where these common-place Halloween traditions came from? We have.

Jack-o-lanterns (pumpkin carving)
Traditionally other root vegetables such as potatoes and turnips were used. Irish legend dictates that a man named Jack was denied entry to heaven for being too sinful; nor could be go to hell for he had played tricks on the devil.

Consequently, he was condemned to wander the Earth with his lantern looking for a final resting place.

Apple-bobbing
From the Roman October festival for remembering the dead. During this time the Romans remembered Pomona, the goddess of trees and fruits. When the Romans came to Britain, they began celebrating this day on the same day as Samhain (a harvest festival). Apple games became associated with Halloween because of this.

Dressing up
This was an attempt to distract and confuse evil spirits. The idea being that if you disguised yourself as a ghoul or wore a mask, the real ghouls who had returned to wander the streets on Halloween would mistake you as another kindred spirit and leave you alone.

Trick or Treat?
During Celtic celebrations of Samhain, villagers would dress as ghosts, demons and other wicked creatures and perform tricks in exchange for food and drink. This custom, known as mumming, dates back to the Middle Ages and is thought to be a precursor of trick or treating.

Lighting bonfires
This was considered to scare away evil spirits, as light triumphs over darkness. Today we light a candle in our pumpkin lanterns, and place them on window sills or outside our homes to frighten off the witches and ghosts.

Roasting hazelnuts
Hazelnuts were believed by ancient Celts to have divine powers. On Halloween, families would gather around the hearth and roast these nuts in celebration of the festival.

So now you know the history of your favourite Halloween festivities, you can enjoy them even more this weekend. 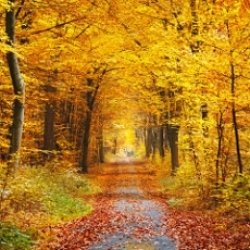 Latest
Autumn is upon us
As summer draws to a close and we officially welcome autumn, we thought we'd have a look at some of the traditions surrounding the Autumnal Equinox.