Animals feature heavily in the literary world; some give advice, some act as a sounding-board for characters, some are at the heart of the story themselves. Here are a few of our beloved four-legged (or more) children's book characters and a reminder of why we love them (many of these feature on the Kumon Recommended Reading List). "Things never happen the same way twice." What is not to love about the idea of a wise lion who is both feared and revered? Aslan is the bold heart of The Chronicles of Narnia series; even when he is not present, he is never far from the children's minds, popping back every now and then to impart his wisdom or save the day. "Oh my fur and whiskers! I'm late, I'm late, I'm late!" One of the many animal characters in Lewis Carroll's Alice's Adventures in Wonderland, it is the White Rabbit who leads Alice down the rabbit hole and into the weird and wonderful world below. The rabbit is contrasting in character to Alice, sometimes short-tempered and sometimes grovelling, but he plays an important part in navigating her on her journey, even if somewhat accidentally. "Well, James, have you ever in your life seen such a marvellous colossal Centipede as me?" Roald Dahl's James and the Giant Peach sees title character James' life turned upside down by the death of his parents. A little bit of magic causes a peach to grow to the size of a house and James finds a band of overgrown creatures inside, including the Centipede, the Earthworm, The Old Green Grasshopper, and many more. This is where James' adventures really begin. The Centipede is a jolly character, though does get the gang into a few sticky situations. "It is more fun to talk with someone who doesn't use long, difficult words but rather short, easy words like "What about lunch?" Christopher Robin's furry friends in A. A. Milne's Winnie the Pooh are actually stuffed animals, but they are real enough in Christopher Robin's imagined adventures. The adventures focus around Pooh, the kind and generous, if somewhat slow-witted, bear. "A man-trained boy would have been badly bruised, for the fall was a good fifteen feet, but Mowgli fell as Baloo had taught him to fall, and landed on his feet." In Rudyard Kipling's The Jungle Book roles are almost reversed as it is the human boy (man-cub) Mowgli, who is living in the world of the animals. Adopted by wolves, Mowgli lives in the jungle as would a wolf, hunting for food with his brothers. 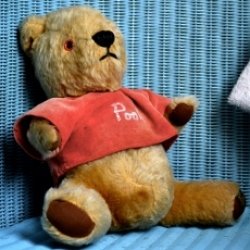